God never intended for the impartation of forgiveness to based on the basis of "worthiness"; whether the person deserves it or not, but rather, from love, grace and mercy instead. Because once the forgiveness is extended, the healing process begin, not just on the receiver, but on the giver as well.
Posted by KK at 7:52 AM 1 comment: 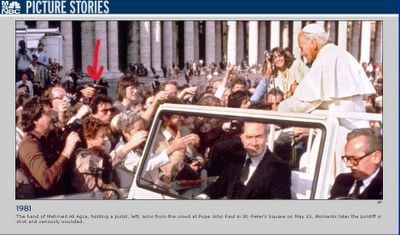 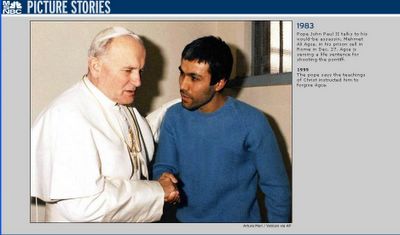 As the world prays for the Pope John Paul II, many websites take the opportunity to publish the story of his life. One that caught my attention was the slideshow on MSNBC. It portrays the early life of Karol Wojtyla, which was the Pope's name before he took the name John Paul II at his election. Two slides that caught my attention was the one on his attempted assassination and the one when he met up with the would-be assassin in prison. The pope quoted that it was Christ's teaching that instructed him to forgive Agca, his would-be assassin.

Forgiveness was why Christ came down to earth. It was his purpose to die on the cross so that we would receive the forgiveness of God that we never have nor would ever deserve. However, unforgiveness continues to plague the world, and the church itself is not spared. Taking the Pope's example, one could say that John Paul could forgive Agca because he has fully devoted his life to God, and if the attempted assassination was done on someone else close to him, the Pope might have a different reaction. I beg to differ on this because I see that the Pope will react the same way because of his stance of Christ's teaching on his life. John Paul acknowledged that Christ's teachings is more important than anything else in his life, including his own personal feelings.

I had a wonderful time yesterday sharing on the issue of "sin". One point that I highlighted during my sharing was that sin simply means disobeying God. As we look at the people around our lives, we notice that there are plenty of non-Christians that behaves a hundred fold better than some Christians. And yet, the bible terms them as "sinners". I pointed out during the sharing that the reason for this is because non-Christians do not know God, and therefore, CANNOT obey God, no matter how "good" they are in the eyes of others. Christians, on the other hand, have the choice to obey God, or disobey God (hence "sinning"). Non-Christians will continue in their blindness until someone bring them the light, or the truth. However, coming back to the point that I want to make, we as Christians now have the choice to obey God. And one of God's imperative for us is to forgive others just as Christ have forgiven us. There is just no excuse that we can come up to justify our disobedience on this commandment. Period. No matter the crime or the atrocity that has been committed, we are still left with only one way to obey God, that is to forgive. Any other outcome would result in sin.

The reason why people struggle with forgiveness is the intense desire for justice. The reason why we have this desire is because God gave it to us. It's a good trait to have. Animals lack this desire. However, God said that He, not us, will take care of justice (Romans 12:19). The moment we take justice into our own hands, it shows that we lack faith in God. Our lack of faith will basically state that God is not whom He claims to be (not Almighty), thus making Him a liar, and finally, making Him anything but God. However, God has called us to trust in Him (Proverbs 3:5), and when we do this, we will reap the rewards of our obedience to Him, and for our faith in Him.

Until we understand the value of forgiveness by obeying God in forgiving others, we will never be able to receive that forgiveness from God (Mark 11:22-25). God never made it a prequisite for us to be perfect before forgiving us, but rather, in His infinite love, Jesus died for us while we were still sinners.

Easter has past for bout a week already. I pray that in my own life, I would see everyday that the cross Jesus has died on would be enough proof for me to obey God without the need to know why.