You said,
Ask and you will receive
Whatever you need
You said,
Pray and I'll hear from heaven
And I'll heal your land

You said
Your glory will fill the earth
Like water the sea
You said, Lift up your eyes
The harvest is here,
the kingdom is near

You said,
Ask and I'll give the nations to you
O Lord, that's the cry of my heart
Distant shores and the islands will see
Your light, as it rises on us

O Lord, I ask for the nations (repeat)

你是我最深愛的人 (You are my beloved)

Ziggy says coffee cost too much too.... 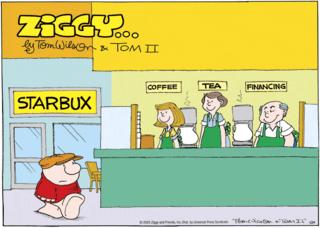 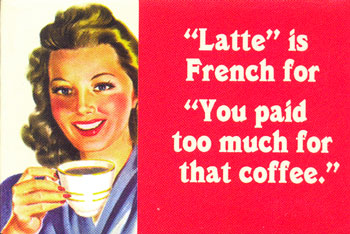 This must be the main reason why I stopped going for premium coffee...

What's in a coffee? 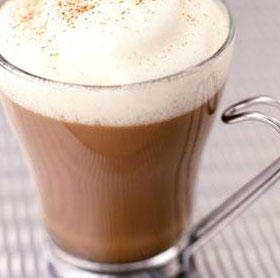 Make a trip to Starbucks or CoffeeBean and you'll be spoiled with choices for coffee. However, I always wondered what's behind those fancy coffee names, and sometimes, I guess I'm just too proud to ask. Anyway, I've managed to get a list, and to all the proud coffee lovers, here's what your coffee's made of...

Vienna Coffee
A Double pour of Espresso
(Served in a tall glass or cup, topped with whipped cream)

Espresso Macchaito
An Espresso 'marked' or 'stained' in the center of the crem
with a dash of hot foamed milk.
(Served in a short glass or porcelain cup)

Mocca (Pronounce as 'Moh-kah' not 'Moh-cah'...)
1/3 Espresso and Chocolate Syrup
2/3 Frothed milk
(Served in a tall glass or cup and dusted with chocolate)

Long Black
A pour of Espresso usually extended to three quarters full.
(Served in a regular size glass or porcelain cup)
Posted by KK at 1:05 AM No comments:

"You And Me" - Lifehouse

What day is it?
And in what month?
This clock never seemed so alive
I can't keep up and I can't back down
I've been losing so much time

And it's you and me
And all of the people
And I don't know why,
I can't keep my eyes off of you

What day is it?
And in what month?
This clock never seemed so alive
Posted by KK at 1:43 PM No comments:

"Peace I leave with you; my peace I give you. I do not give to you as the world gives. Do not let your hearts be troubled and do not be afraid." - John 14:27

These were the very words that Jesus spoke of before that fateful night of His betrayal. He knew that His time was near, and instead of being filled with fear and panic, He took the opportunity to speak words of comfort to His disciples.

Jesus spoke of the peace of God. He made it clear that this peace is different from the peace that the world gives. This made me think. What kind of peace does the world gives anyway? Not much at first thought. But suddenly, when you do take time to think more about it, there seems to be alot. From relationships to finances, to governments and political systems, and even institutions and social structures, we see how all these systems that were established for years seemed so secure in its foundation. For example, the current generation in Malaysia has no concept of how devestating war could be except from the images that the media carries. We carry this sense of security that allows us to sleep at night knowing that when we wake up tomorrow, things will remain the same as it is yesterday. We call "this" peace. But is it? As history has shown for centuries, peace in a country never lasts, no matter how strong or secure the government is. From the grandeur of Rome's government, what's left of it is only its name and some ruins. So, if a government, regardless of its size and strength, can be so fragile, what more of the systems that it tries to protects. From financial to educational institutions, all these will fall when the government crumbles.

However, it is in instances like these that Jesus mentions we can still have the peace of God. This is because no one is greater than God. He is a sure foundation. No one can move Him. And the strength and security of God, if we choose, can become our peace. For Christians, the peace of God has become something that's mundane for us because we've heard of it so many times. But until we treasure it in our hearts, it will remain just a "good idea". This peace was never meant to be just a good idea, or an option / alternative for Christian to hang on to during troubling times. Rather, it was meant to keep us steady, with our eyes fixed on Him, and our hearts and minds still filled with His purposes and will regardless of what's going on in our surrounding. It was this peace that Christ died on the cross so that by His sacrifice, it is something that we can have.

I guess the opposite of the peace of God, would be the wrath of God. Spending a week listening to John Piper preaching on this topic has opened up my eyes to another side of God - God is not only love, He is also just. And oh the price that Christ paid so that we can stand justified in the sight of God, if we only knew what it cost, we would change the way we live.

May we not treat the peace of God lightly. It's given to us so that in calm and stormy times our lives, this peace will remain our anchor that keeps us close to God.

"Lord, I thank you for this peace. I thank you that in my wretchedness, you've found favor in me thru Your Son Jesus. But may I be continually changed, and may Your peace that surpasses all understanding, keep and guard my heart in Christ Jesus. Amen."
Posted by KK at 12:12 PM No comments:

I know where you hide
Alone in your car
Know all of the things that make you who you are
I know that goodbye means nothing at all
Comes back and begs me to catch her every time she falls
Posted by KK at 11:47 AM No comments:

"Tea And Sympathy" - Jars Of Clay

Fare thee well
Trade in all our words for tea and sympathy
Wonder why we tried, for things that could never be
Play our hearts lament, like an unrehearsed symphony

So fare thee well
Words the bag of leaves that fill my head
I could taste the bitterness and call the waitress instead
She holds the answer, smiles and asks one teaspoon or two

It's funny how time can just pass you by like that. I guess sometimes it's interesting in the sense that though we are all in the same time and space continuum, yet, we can experience time differently.

These past few months have left me with new questions of life. It has challenged me to answer for my choices of action and speech. I guess that's important at one point or another. However, even through all the questions, and searching for truths to answer them, yet, above all, one truth remains the same, that God is still on the throne. Now, before you fill your mind with assumptions, let me explain what I'm trying to say.

Let's try with this scenario: Two persons sitting next to each other in a bus stop. The person on the left has just managed to acquire a high-paying job in a reputable company. That's all he has ever dreamt of and wanted. To him, at that point of time, there could be nothing that could top that. Next to him, sits a girl, who has just found out that her boyfriend has cheated on her. He left her after he was bored with her even though she has given everything that she could, to be with him. Here's what I'm trying to say: Same time, same place, and yet, a world of difference in their emotions. Now, let's fast forward this story to the future for say, a couple of weeks. So, two weeks later at the same bus stop, sits the same two people. However, this time, the guy found out that the guy who promised him the job was fired, and never managed to get his appointment letter done before that uneventful day. So, he lost his dream job, even before getting it. And next to him, sits the girl from 2 weeks back. However, things has turned around for her. Her boyfriend has realized his mistake and how much he misses her, and in earnestness and repentance, came back to her and ask her for another chance. Though she is reluctant, but she took the risk to give it a shot, and to her, it was a long awaited sense of relief from the hurt that she was going thru. Again, same place and time, yet their emotions differ by light years apart.
This story could continue, with the guy finding another job, and the girl getting betrayed again, and that's life. There're never any guarantees. Some people say that life's how we make of it. I guess what they mean is that the guy when lost his job could sort of "reassure" himself by saying to himself that there's always other dream jobs, and the girl could say that he don't deserve her. But we know, and time bears testimony to this, that life don't always to turn out the way we want, no matter how sincere our initial motives were, or how "good" we were in carrying out our lives.

But it is in the "hopelessness" of this "cycle of grief" that the awesomeness of God will shine. He is never moved nor shaken by any calamities or tragedies. No matter how terrible our situation maybe, He is still God. He is the God who remains in control. Nothing ever surprises Him. Nothing is too great nor too difficult for Him to handle. And here's the good news: "He is on our side."

And this is my hope. God's still on the throne. He's on my side. I didn't do anything to deserve His support or blessing, but it is in His eternal grace and mercy that I can find a place of refuge that's so secure. He's my tower and refuge, my God in whom I trust.

"Lord, more that just words, I pray that you take my heart and make it yours. In my brokenness, restore me, and let me know, that it is You, and only You, that can ever make me complete. In Jesus' name, Amen."
Posted by KK at 7:48 PM No comments: