What is an IE?

Many times, people have often come to me and ask me what was my educational background. The moment I tell them that I took up "Industrial Engineering", I'd like get a blank stare from them. Often, they would reply asking "Is that like Mechanical Engineering?", I would say, yes and no.

My good friend Vai Seng recently sent me an article regarding this issue, and though long, I thought that it clearly describes what an Industrial Engineer is. This would be useful for those of you studying, who are still choosing between majors. Anyhow, here it is:

Industrial Engineer. A very impressive title. Slides easily over the tongue. But what is one? Must be an engineer, but what type?

“Industrial” brings to mind bellowing smokestacks, mighty gears turning, the screaming of a steam whistle, forges flaring, millions of fellow workers building a stronger nation, the American way of life!....all very soul stirring, what does an IE do?

First, let’s see if we can find a niche for the IE in the vast engineering disciplines. There are four main fields:
Chemical: Bubble-bubble, toil and trouble. If it's sticky, gooey, gummy, grubby, bubbly, they're in it;
Civil: Bridge builders, architects-to-be, road makers, stress and strain types;
Electrical: Zap! Crackle! Pop! AC/DC! Tiny black boxes with tiny black boxes
within;
Mechanical: Clink-clank-clunk! What makes the world go round: gears, spindles, sprockets, and spanners.

Others seem to consider the IE as a sadist whose biggest kick in life is making people work faster-for-lesser. “Efficiency Experts.” The management's stool pigeons. “Young wet-nosed punks to tell me, after 10 years with the company, that I'm working too slow!”

These people are entitled to their opinions, but for those that have no idea at all about the difference between an IE and the other engineers, probably 90 percent of the people in the world (89 percent of who have never heard of IE's), the following may help. It is an attempt to describe some of the many different parts of being an IE, stressing the difference between IE's and other engineers.

The IE brings a sense of business reality to the other engineers. The IE straddles the vast gap between practical managers and the development engineers. He is the guy who tells the EE that his solid gold, platinum plates, lithium-line relay contacts in a design are being replaced by tin ones. “Is that third brace really needed?” This is where the IE's training in the various engineering fields comes in handy. He is a translator. The engineer can communicate with an IE when he may be unable to show the non-engineering boss what he is trying to do. And visa-versa, the IE can bring the word from above to the engineers, reminding them that they are here to make money. Also, the IE has a sporting chance if the engineers try to snow him with technicalities; they do not know what he may know.

He is a step backer. He takes the proverbial one step back. He gets the big picture. Often people working intensively on the details of a project or design fail to see where they are going overall. While the ME is wondering if the right-torque framastan should have 5 or 6 spokes for the wombat model, the IE has decided that the fritler doesn't even need wombats.

An IE is a people buffer. Not only does he work with the bright shining, purring machines, but also with their hairy, ham-fisted operators. Is Joe Blow working as fast as possible with the thingie cutter? How much should he be paid? Per piece or not? Call in the stop watch people, the IE's. They will help you set up work standards for comparison, they will suggest ways of job evaluation, possible incentive plans to use, etc. Joe Blow may complain at first, but the IE's help him, too (if, admittedly, he's not part of the dead wood trimmed away), (that is life, Joe), as more efficient work is usually easier work.

Most IE's really don't go around pulling wings off flies, kicking old ladies' crutches, etc. They're are more or less human. They don't want Joe's job. They want to find faster, cheaper ways to do it. Also, safer ways, which brings up the next topic:

An IE is a people protector – safety. Keeping Joe Blow's paws out of the cutters “field of authority.” If not for Joe's sake, then it is at least more efficient. Many people consider safety as a joke –never take it seriously, like security. “Hah, the rope will hold, whatch’a worrin ‘bout?” IE's make Mr. Blow safe if he wants to be or not. The IE's ears perk up at the sound of “famous last words…”

An IE can be a plant planner. Building a factory? Should the tinker-tuners go near the fudge-forgers? Should there be a moving belt or a passageway? How much? How soon? Which way? Where? When? Don't ask the Civil Engineer – he's trying to keep the roof up; the ME's unsticking the door life; the EE is working on the lights, the ChemE is making smoke in the basement….well anyway, it is the IE who's had the training, he is the dude who coordinates and plans. It is his neck if the feather fluffer winds up next to the molasses mixer. His training includes human factors as well as traditional engineering knowledge.

The ME may see no reason why he shouldn't have the walls painted black to absorb heat, but the IE will also balance in the effect it will have on employee moral. Also, where will you put the plant. Once the plant is located and built, it is very expensive to correct any major errors. An IE would be a valuable asset in designing the assembly plant.

He can be a sampler. Who decides, out of 100 wombats, how many samples must be take to be 95 percent certain that 90 percent of the goods are good? A good IE can. He has been trained in statistics, probability, and reliability. Practical, applicable statistics, too, as opposed to what a math major would get. The other engineers? They may have at most 3 hours of statistical theory. Not much of a confidence there.

An IE is a betterwayer. She has “Is this the best way?” constantly rattling around in her head. Here, perhaps, the difference between and IE and the other engineers is less than noticeable. All engineers try to come up with better methods of making something happen. The ME's, EE's, etc., have the advantage of technical knowledge in their own fields, but the IE may be able to pull something from, say, the ChemE's and apply it to an ME's problem. The IE's big advantage comes in after the prototype is made. He knows the assembly line better than the other engineers, and can see a great use for the new No. 1
zoot sticker in the No. 3 wombat assembly line. The IE has ideas on what to do with the engineers' new ideas.

An IE is good at maximizing. If you want to ship your fresh wombats, and route A takes 3 hours at $4 per wombat, route B makes 6 hours at $2, and route C takes 4 hours at $3.50 each, and you lose $1 for each hour a wombat is outside, what is the best route? This example may be simple, but when you consider a plant's normal production of wombats per day, and all the various methods of transportation available, it gets very sticky.

Many people would be surprised at the elaborate formulas IE's use to solve these types of problems (when they are not pulling wings off of flies or winding their stop watches). You just can not pull the answer out of your hat. The other engineers could possibly “plug and shove” to get the answer, but an IE is trained at it.

One main difference between IE's and other engineers is ladder climability . An EE can look forward to being head of the EE department someday, but that is usually about it. The IE finds it a comparatively easy transfer to management; she usually has a foot half-way into management to begin with. Her background will be an asset. Also, she may be a bit more open minded that the EE, who would favor his old department. An IE's “old department” is the whole plant.

Another important difference is survivability. An IE is like a cat – he can always (well, more often than not) land on his metaphysical feet. His knowledge can be used in almost any field, from industry to hospitals, from military to research projects. If the rubber market drops out, he can jump to, say, aeronautics. The ChemE, however, will be caught in a fairly specialized field, and he may go down with the rubber duckies.

Now then, many IE's are not going to like the fact that we may have brushed over lightly or even skipped their pet IE subject, but it is hard to cover IE’ism completely, which brings up the next characteristics of Industrial Engineering.

Indefinablityness. One of the most frustrating characteristics of Industrial Engineering to some, but appealing to others, is that IE cannot be defined in a little capsule summery. There are no definite boundaries to IE. It is so wide, from management to time study, from quality control to design analysis, almost anyone can find her niche sooner or later.

An EE is an EE with fairly predictable limits, but when you say “I am an IE,” people still haven't gotten you pinned down, pegged away in a mental cubby hole. You are an unknown factor, they don't know what to expect.

The world needs non-superspecialized engineers – people who can get an overall view, bring together the specialists, and handle new, presently unforeseen and unpretrainiable events.

I hope it has given you at least some vague idea of what an IE is and how she differs from other engineers. I admit it is biased, if not a little aggressive, but then many an IE walk about with a large chip on her shoulder, because when she says, “I'm an IE!”, people still say, “Whatzat?”.

Based on: Ronald Smith contribution “A Student IE’s Answer to “What’s an IE?” in the book Intro to Industrial Engineering and Management Science by P.Hicks 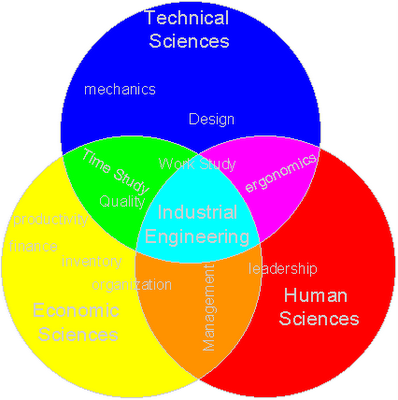